Prof. Sheila Tlou is Co-Chair of the Global HIV Prevention Coalition and Co-Chair of the Nursing Now Global Campaign. She is former UNAIDS Regional Director for Eastern/Southern Africa, former Minister of Health of Botswana, and former Director of the WHO Collaborating Centre for Nursing Development in Primary Health Care.

As UNAIDS Regional Director, Prof. Tlou provided leadership and political advocacy for a sustainable AIDS response in 21 African countries. As Co-Chair of the Nursing Now Campaign, she leads a global movement, run in collaboration with the WHO and ICN, which aims to maximise nurses’ contributions to achievement of Universal Health Coverage.

The Global HIV Prevention Coalition addresses the rise in new infections despite success in treatment in all countries. As Minister of Health, Prof. Tlou led a comprehensive AIDS prevention, treatment, care and support program which is still a model in Africa. She represented Eastern and Southern Africa in the Board of the Global Fund for AIDS, TB and Malaria.

She has received over thirty awards, among them Botswana Presidential Order of Honor, Princess Srinagarindra Award from Thailand, Christianne Reimann Award from ICN, and Princess Muna Al Hussein Award. She is United Nations Eminent Person for Women, Girls, and HIV/AIDS. Prof. Tlou has a PhD in Nursing from University of Illinois at Chicago and has many publications on Human rights and HIV/AIDS. 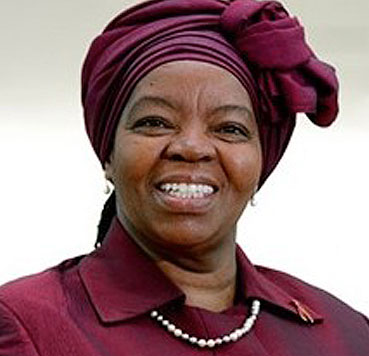